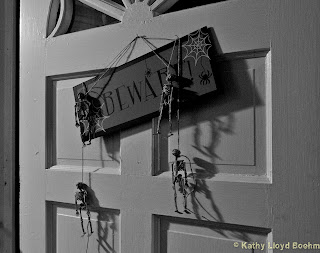 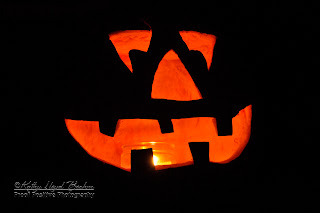 For the second year, we hopped on our 2003 Goldwing Trike and rode the Ridgewood Fall Classic, a 40-mile police-escorted motorcycle ride through scenic northern Bergen County, NJ. This ride is a benefit for Tomorrow's Children's Fund against pediatric cancer, in honor of Shayne James, Jr., one of our neighborhood children. 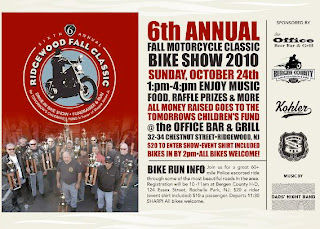 Its quite an experience to be in the midst of hundreds of roaring motorcycles!


Click here for our YouTube video of the start of the ride out of the Bergen County Harley Davidson parking lot in Rochelle Park.  (Hold your ears).

To see the fall foliage, click here for another YouTube video of today's adventure .. It was a bumpy road up that way, so it was a bit wobbly with the camera as well .. The colors were magnificent though! 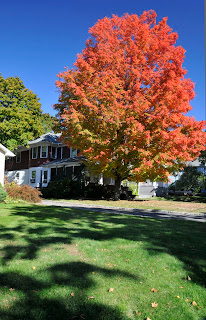 Ah, Autumn, our favorite season!  Just a few leaves down so far ... The maples here in northern New Jersey are just starting to pop.  Beautiful!
Posted by Kathy Lloyd Boehm ... at 12:52 PM 1 comment:

Lost pigeon in our yard 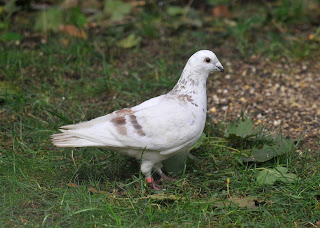 This isn't a remarkable photo, but this lovely bird has been our focus since last Wednesday when he appeared at our main bird feeder.  He's been coming back nearly every day, feeding for a few hours at a time.  He's a lost homing or racing pigeon, wearing a leg band with incomplete identification. We can only make out 3 numbers, "479".  We want to get him back to his rightful owner, safe and sound.

In order to do that, we've been advised by several racing pigeon people that we have to capture him to get his full i.d.  Evidently, *IF* we can do that, we can simply look him up online and get him back where he belongs.  I love a challenge. Tom'w, we'll start plotting how to make this happen .. We have some ideas and a large cage for him, in case we are successful.  Stay tuned.

The pigeon is still with us!  We contacted all of the local racing pigeon associations, had another blog entry put up by a local bird sanctuary, and even put up an ad on Craigslist, but no luck.  Nobody has claimed him.  We learned that if this bird had been racing, he would have been wearing a second leg band.  Our considerable efforts to capture him have been unsuccessful.  We were told that these birds are smart .. and they are!

We tried the old "box, stick and string" trick but he wouldn't fall for it.  We even set up a blind with a blanket on the nearby fence, but to no avail.  Our squirrels, Sparrows and Mourning Doves waltzed under the box, not a care in the world, but not this pigeon.  He studiously avoided it.  After a few days, we took it away.

He just calmly watches us from his perch on a nearby tree and comes down to feed as he pleases.  We see him nearly every day.  His weight is good, his feathers look clean and he seems to be thriving.

We had our first frost warning last night .. We hope he makes it through the NJ winter.  We feed our wild birds all season long, even when it snows, so he will be well fed as long as he hangs around.