Restored Cougar from Wall Township rolled out at Intrepid Museum

After 2 years and over 2,500 hours of volunteer work plus 2,000 hours of work by my husband Eric and his assistant, Kevin Banat, the F9F Cougar was rolled out in her debut this morning.  After a full week of rain, the sun came out to give her a warm welcome as she took her place among the other 30-or-so aircraft on the flight deck of Intrepid.
The restored aircraft wears the colors of fighter squadron VF-61, which flew from Intrepid in 1956. 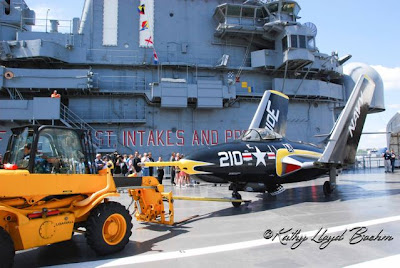 The Cougar spent its retirement from active service in "Airplane Park" in Wall Township in Monmouth County, NJ.  On hand for the unveiling were around 30 Wall citizens who played on the aircraft when they were children. 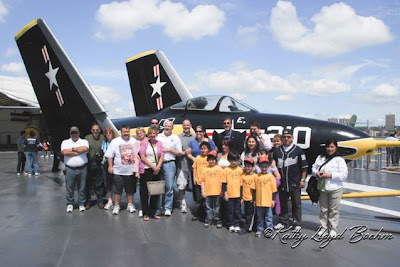 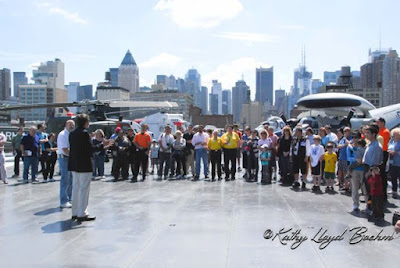 It was a proud day for the Aircraft Restoration Team ..
Following the roll-out, Eric did media interviews.  All of the NYC stations were there.  My hero! 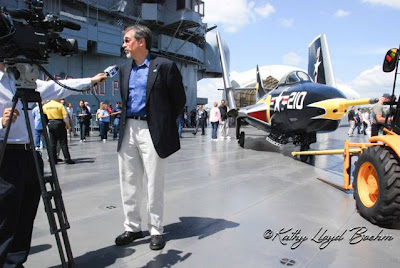 To view 40 photographs of the event, please visit my website, Proof Positive Photography.  Click into the site, then go to "Online ordering", then to "Client events" and enter the secret password "cougar".  Photos will be posted for viewing until June 20.  (Email me after that).

And here's a video of the roll-out from NY1 which features Wall Township Committeeman Clint Hoffman and Eric!

For more on the Cougar, visit the Intrepid's website!
Posted by Kathy Lloyd Boehm ... at 11:18 PM