After 3 years of lobbying and planning, and two weather delays, the Space Shuttle Enterprise, bound for Intrepid Sea Air and Space Museum, finally took off from its former home at the National Air & Space Museum in Washington D.C. and landed at JFK Airport to the cheers of hundreds of supporters and a worldwide TV and radio audience.  (Click any photo to enlarge). 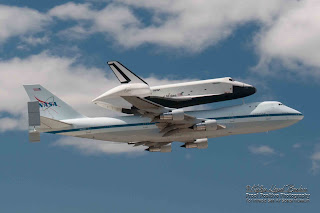 It was a blustery, chilly morning but the blue skies and puffy white clouds were a gorgeous backdrop to the elegant aircraft flying overhead.  As the Shuttle taxied toward the reviewing stands, the 747 pilot poked his head out of the plane and flew a flag which will be donated to Intrepid and made part of the exhibit when it opens to the public in July. 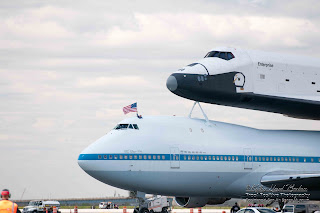 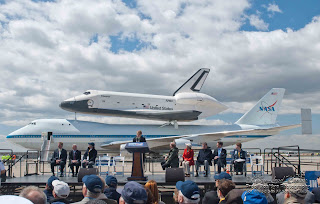 NY Senator Chuck Schumer addressed the crowd, as did "Mr. Spock", Leonard Nimoy, who told the story of the Trekkies who, in 1976,  lobbied President Ford to change the name of the Shuttle from "Constitution" to "Enterprise."  Mr. Nimoy came back to see "his" space ship again, 36 years after it rolled out of the assembly plant in Palmdale, CA. 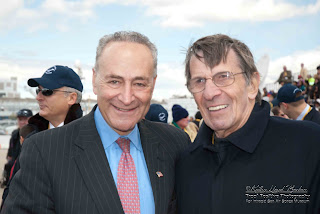 Dozens of kids dressed in space suits came to see this historic landing, some from Ridgewood NJ Hawes Elementary School, where I photographed its re-opening ceremony for Patch.com in September. 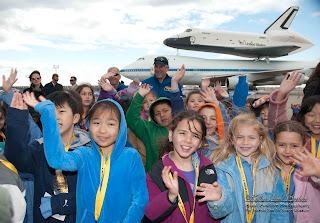 And a rare shot of me on the other side of the lens .. 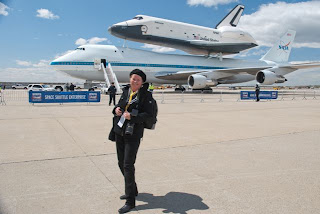